Louise sent in this entry for ASDay 2014, from Tumblr blog MindTheLSpace


I’m currently reading some reviews for a book containing a character with Aspergers. I haven’t actually read this book, so I don’t know whether it’s any good, what the portrayal of the autistic character is like etc, but nonetheless, some of the patterns in the negative reviews are troubling me.
One, that the main plot of the book centred around a divorcee looking for a new partner, with the ‘son with Aspergers’ plot being secondary. Some reviewers seem very surprised that this is the case, and several saw it as a negative. This is despite the fact that the author specialises in romance, and the blurb isn’t in any way misleading about what the central plot is.
Two, that the book is written in a very light-hearted, jokey tone. Several people are claiming that this is 'inappropriate’ of otherwise 'weird’ for a book where one of the main characters is autistic.
Three, a handful of reviewers complained that the book didn’t give enough 'insight’ into what it’s like to raise an autistic child.
So basically, if a book contains a prominent character on the autistic spectrum, the book must be:
1) Entirely about the ASD. More specifically, about the negative effects ASD has on both the individual and the individual’s family.
2) Written in a serious tone, because autistic people can’t be written about in a light-hearted way.
3) A substitute textbook with something to teach non-autistic readers.
To strip that down:
1) Autistic characters can’t be incidentally autistic, or 'just there’.
2) ASD is always sad, and serious, and difficult. There’s never anything to be light-hearted about.
3) Autistic characters should serve an educational purpose. They can’t just be there in their own right.
So, to extrapolate (some of you may say extrapolating a bit too far, which is fair enough.):
1) Autistic characters can’t be standard characters. They’re the exception. A point has to be made of them.
2) Autism is a tragedy. A perpetual tragedy for both the autistic person and everyone who spends more than five minutes around them. This puts us straight into the 'Disability as a tragedy’ narrative, which is a huge, huge issue, and one most disability campaigners want to get rid of.
3) Disabled people exist only in relation to non-disabled people. Again, this is a very old and very fucked up narrative, which most campaigners would like to see consigned to history.
I’m not for a single second suggesting that all these reviewers were actively thinking “How dare the author make jokes, disabled people are tragic and terrible!” as they wrote down their thoughts. What they were probably doing, however, was writing down the expectations and subconscious beliefs that the world around them had, in numerous subtle ways, encouraged them to have. Ideas about disabled people being 'other’ in a negative way.
I find the ideas presented above very damaging. Because to ourselves, we’re notthe other, but that’s the only way we ever get to see ourselves portrayed in the public eye. Our lives, generally speaking, contain positive and neutral emotions as well as negative ones, so it’s strange for us to think of our entire beings as something that has to be written about in a death-bed tone. And thinking of ourselves as tokens or vehicles, existing purely to educate non-disabled people, is faintly disturbing.
Disability discourse needs to change, and representation of people like us, as opposed to representation of Our Condition 101, is so, so important.
(This is the book in question, along with the reviews I’m reading, if anyone’s curious)
Posted by Corina Becker at 7:13 PM No comments:

Liese sent in this submission for ASDay 2014, on her Tumblr Waking Up to Live.


Read more »
Posted by Corina Becker at 7:05 PM No comments:

I should have had this out earlier. For that, I apologize.  But here are our 2014 Participants!

chavisory, When I hear you say
Ben Edwards, Ten Examples that Show Violence Against Autistics is Alive and Well in American Culture (see trigger warnings)
Stimmycat, Glimpses of unseen autism
Hannah B on being autistic, not okay
Haley Outlaw (My) Autistic History
n8chz The real reason I'm an anagorist
Alice Hewitt, Cages (see trigger warnings)
Bigger On The Inside, ASD, ASD and ASD (see trigger warning)
Jane Strauss Âû, Insult or Compliment?
AutismDogGirl, Autism speaking day there is just to much to say
Emma Goodall, Hyperfocus as a useful tool
Daniel Obejas, Communication Shutdown or Autistics Speaking Day: Which will you celebrate?
Trebled Galaxies, Thoughts of the Neurodivergent Twin
FeministAspie, Human
Catsidhe, To Whom Am I Speaking?
ischemgeek, Autistic ways of reacting
Amanda MillsAmanda Mills (@NaturentheCity on Twitter) , Pride (and Shame)
Becca, I'm Tired
Abby, Being an Unperson
Kristin Guin, To all my fellow autistic people
Kit Mead , Autistic Pride and What You Need to Know (See Trigger Warnings)
Timotheus "Pharaoh" Gordon , The State of the Black Autist
Neurodivergent K, It's Autistics Speaking Day & I have not much to say


Posted by Corina Becker at 6:17 PM No comments:

So I have images for this year!! 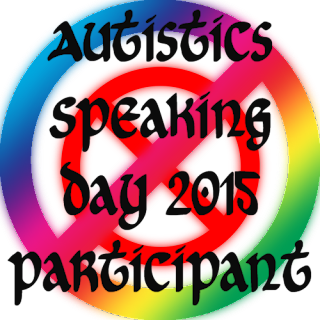 I also have the submission form ready to go, so if you already have something written that you want to send in, please feel free to fill it out! It can be found through this link.

I want to remind everyone that anything you submit to ASDay is your work; you are free to participate in other events with your work.

Because ASAN-Atlanta is calling for submissions for Neurodiversity November, and it's open to all neurodiverse people.  So check it out here!

There's also interest about Autistic History Month, which is also November.  I hope this is the right link to it (if not, let me know).

I want to thank everyone who is even thinking of submitting anything to either ASDay, Neurodiversity November, and/or Autistic History Month.  This is all telling our stories, our history, our lives.

I also want to thank everyone for bearing with me this year; I've caught a nasty cold which I'm still trying to shake off, and hopefully be well for November 1st this year.  I will do my best to run ASDay, but I might not be as fast as I have been in previous years.  I'm still very excited about ASDay, and can't wait to see what this year has waiting!

Thanks again! See you November 1st!
Posted by Corina Becker at 6:47 AM No comments:

I wanted to let everyone know that yes, I am planning on running ASDay again this year.  It'll be what, our sixth year? Wow!
I am, however, stalled in my prep for this year. My computer came down with a virus and is expected to be in the shop for another week.
So, if you have any pieces you want to submit, use the 2014 form for now, and I'll update when I get my computer back.
Posted by Corina Becker at 9:59 AM No comments:

The Submission Form for ASDay 2021 is now up! Please follow this link.
If you have phobias, PTSD or are triggered by subjects, please see the Content Filter Lists page above to access safe options. If there is content that you feel needs to be under a Trigger Warning, please don't hesitate to inform us; we want ASDay to be as safe as possible for everyone.